Northfleet Harbour is a fascinating site, and a large part of our work is about raising local awareness with residents and users of the Thames about its potential.  Despite its huge size, there has been little activity in the area since the Harbour was sealed off by a flood defence wall built across the entrance.  The harbour itself is virtually intact with all of its walls being preserved in time as they were prior to World War 2. 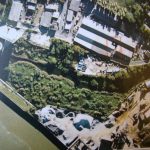 In the picture on the right, the harbour walls can clearly be seen surrounding the silted over harbour. The factories to the left of the picture have recently been demolished and will be a £0.5bn mixed development site as part of the regeneration of the area. The bottom left hand corner of the picture shows the access point to the harbour cut off by a flood wall.  The Trust’s aim is to have this obstacle removed and an alternative flood strategy created that allows this historic harbour to provide a desperately needed maritime resource for the Thames. 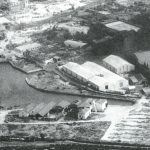 The Harbour walls are in good condition and need little work to bring the Harbour back into use.  This 1950s aerial view shows very clearly the harbour at high tide, and the shape of the harbour remains identical to the picture – requiring only the removal of the flood wall.