Northfleet Harbour is formed from a natural river inlet of the River Fleet into the Thames.  Parts of the harbour grew over solid chalk, forming a very usable marine facility from a very early time.  A short distance upstream on the River Fleet (now known as the River Ebbsfleet) is evidence of Roman Temples, a Roman Burial Ground, and a Roman Villa and related buildings; and later a thriving Saxon community which left behind a rare water wheel excavated as part of the Ebbsfleet International and High Speed 1 railway works.

The harbour was later adjacent to Orme House, which 16th century maps suggest was situated to the east, and is known to have been visited by reigning British monarchs.  The River Fleet was no longer navigable by the 18th century, as a watermill and weir had been created for flour production.  Parts of this may still survive – a full archaeological study is needed – but this flour mill was then superceded by a water mill for cement production, parts of which do still survive.

More recently the harbour was home to the development of the cement industry, which is of major significance as this would have been one of the earliest sites for cement exporting.

The birthplace of modern cement 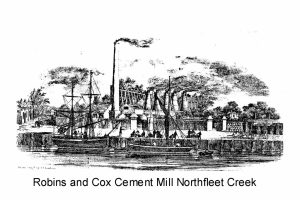 The illustration of Robins and Cox Cement Mill (above) clearly shows the beehive bottle kilns producing cement, and this cement being exported by sailing ship from the quays in Northfleet Harbour.  To the right of this picture is a small building, which is the cooperage where they made the wooden barrels first used for transporting cement. 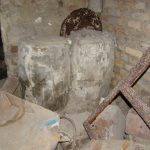 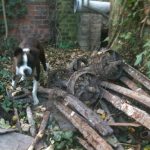 These two exciting recent discoveries (right), date back to the early cement production.  The narrow gauge track can be seen on early maps leading from the site of the beehive kilns – one of which still survives as a Scheduled Ancient Monument.  The wheels would have been from a cart that would have run on these tracks, probably pushed by two yard hands.  The two cement barrels (far right) have long since solidified, and over the last century the wooden barrel has simply disintegrated around them, leaving a fossilised remnant of the cement industry – with the grain of the barrel staves clearly ingrained in the cement.  It is amazing that such early remnants of this world-changing industrial innovation are strewn across Northfleet, hidden in tunnels and buried in the undergrowth. 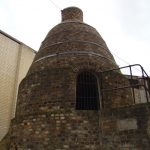 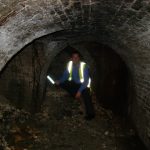 The Aspdin Kiln is a Scheduled Ancient Monument across the road from the Harbour.  The tunnels underneath would have been used for stoking the fires and cleaning out after the cement had been prepared.

The Roman settlement at Springhead, illustrated below, was just a 10 minute walk up the River Fleet from Northfleet Harbour.  At this time, the river would have been navigable to this point, but by the late 18th century navigation was lost totally – Georgian maps show the watermill sluices across the harbour entrance. 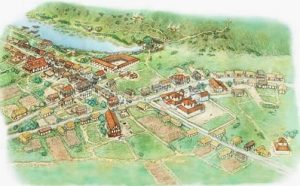 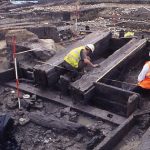 Settlement continued after the Romans left, as was evidenced by finds of a Saxon settlement with a rare water wheel.  Discovered in advance of building the new Ebbsfleet International railway station, the timbers of this structure were almost perfectly preserved. They have been dated to around 700AD, and are amongst the earliest examples of their kind found in Britain, although it is possible that the structure may have been built slightly later with reused timber. Two enclosed funnels, known as ‘penstocks’, directed jets of water onto a pair of horizontal wheels with paddles. The mill was located in the tidal zone of the River Ebbsfleet and it is likely that the ebb and flow of the waters were therefore harnessed.

The Elizabethan era to Industrial Revolution 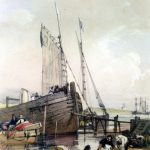 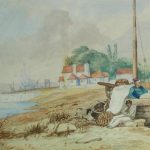 Paintings from the Elizabethan and Georgian eras show us the use of the Harbour in times gone by.  In the picture to the near left, the building in the background is believed to be Orme House – which could date this picture any time from 1537 onwards.  The Georgian painting next to it would have been representative of the harbour through the ages, and you can see ships in the background entering the harbour round the peninsular. 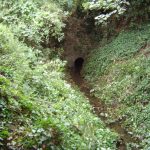 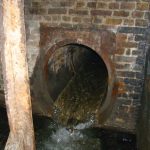 We also know a little of the water mill on the site, which came into operation during this era.  Water flow would have been controlled and levels maintained in the mill pond, and the sluice gate would have been controlled by a pulley operating in conjunction with the cast iron post to the left of the picture (near right).  The extensive remains on the watermill site have been largely neglected, and much more research is needed to fully understand this complicated site.  As this is adjacent to the Harbour, the Trust is keen that this piece of heritage should not be lost.

If you have old photos or images of the Harbour, let us know!  Drop us an email at admin@northfleetharbour.org.uk